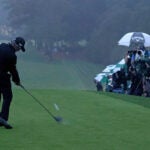 Gary Player is as spritely at 85-years-old as he’s seemingly ever been. His secret, he says, comes down to his ’60/40′ rule.

AUGUSTA, Ga. — Gary Player was a golfer ahead of his time in so many ways, but none more so than in the world of health and fitness. He started working out before football players were even hitting the gym, and says at first he was ridiculed by his peers for it.

“I started working out in 1944…when the other exercise done by the players was taking an olive from one martini to the other,” Player joked.

Player’s approach to fitness was revolutionary at the time, but it helped him go on to win nine majors, and he’s still spritely at 85-years-old. He still shoots around even par most rounds, and he kicked-off the 2020 Masters by crushing a high draw on his honorary opening tee shot.

Player laid down a blueprint other players would follow for years to come. Speaking after his opening tee shot on the matter, he said his advice to golfers of all levels who want to live a longer life and avoid injury on the course is to follow what he calls his 60/40 rule.

Player said that when he was younger he prioritized exercise over eating, because he knew he’d likely burn off whatever calories he was putting into his body. But that’s gotten harder since he’s gotten older, Player said Thursday, and that can easily lead to injuries in the golf swing.

That’s how he developed his 60/40 rule: Healthy living is 60 percent what you eat, and 40 percent how you exercise.

“I now put eating at 60 percent because as you get older, you put on weight, and weight stops a train,” Player says. “When you get heavier and try to swing with the same force you did as a young person, which you can’t do but you’re trying to do it, that’s a quick way to get an injury.”

All of our market picks are independently selected and curated by the editorial team. If you buy a product to which we link, GOLF.com may earn a commission.

That’s why keeping excess weight off is so important, Player says. Once you do that, you can focus on the other 40 percent: Lots of stretching, and what Player calls “exercising intelligently,” both of which will help you avoid injury as you get older.

“Everybody’s different,” Player says. “You’ve got to exercise for your particular body, strengthen the areas that need strengthening to avoid injury.”

Follow his 60/40 rule, and maybe you’ll be like Gary Player when you turn 85: Ripping high draws with a smile on your face.

Luke Kerr-Dineen is the Director of Game Improvement Content at GOLF Magazine and GOLF.com. In his role he oversees all the brand’s service journalism spanning instruction, equipment, health and fitness, across all of GOLF’s multimedia platforms.

An alumni of the International Junior Golf Academy and the University of South Carolina–Beaufort golf team, where he helped them to No. 1 in the national NAIA rankings, Luke moved to New York in 2012 to pursue his Masters degree in Journalism from Columbia University and in 2017 was named News Media Alliance’s “Rising Star.” His work has also appeared in USA Today, Golf Digest, Newsweek and The Daily Beast.