We Review Film and TV’s Most Famous Fat Suits

The trailer for Borat 2 – or Borat Subsequent Moviefilm: Delivery of Prodigious Bribe to American Regime for Make Benefit Once Glorious Nation of Kazakhstan, as it’s officially known – contains little footage of Sacha Baron Cohen in his usual get up, but instead dressed up both as Donald Trump and as a Donald Trump voter. After seeing Borat chased around the streets by fans in the first minute of the preview, it makes sense that Baron Cohen would need to change up his characters. For his new roles, Borat buys a fat suit on screen and is seen wearing one throughout.

While the fancy dress fat suit seen in the trailer is as far from realistic as the one on Bubbles in Little Britain (which looked like it was made from an unwanted settee off Facebook marketplace), the plus size prosthetic seen in the rest of Borat 2 looks pretty spot on. But the slew of fat suits seen on screen in cinematic (and television) history, on the whole, absolutely suck. As a fat woman and renowned chubby chaser, I should know.

Knowing that Colin Farrell, Renée Zellweger and Rob McElhenney all gained weight to play bigger roles, it’s questionable why fat suits even exist in the first place. Drinking melted ice cream each day sounds a lot less stressful than the rigorous workouts required to be in a Marvel movie, so why is the latter expected and the appearance of weight gain handed over to a special effects team?

While Darkest Hour won an Oscar for their makeup effects, including Gary Oldman’s fat suit and plus size prosthetics, a lot of onscreen padding simply looks like someone’s shoved a pillow up their top and been done with it. Whether or not you think fat suits are morally sound or not (they’re not btw), calling the classy from the crappy was a task that could only be undertaken by an actual fat person.

Eddie Murphy in ‘The Nutty Professor’

Is it even an Eddie Murphy film if he hasn’t got a fat suit on? In The Nutty Professor, Murphy plays seven characters and five of them are plus size. It makes you think: is Murphy really that amused by fat bodies or has he got one of those Violet Beauregarde blow-up suit fetishes? All five of the fat suits in The Nutty Professor get a 4/10. 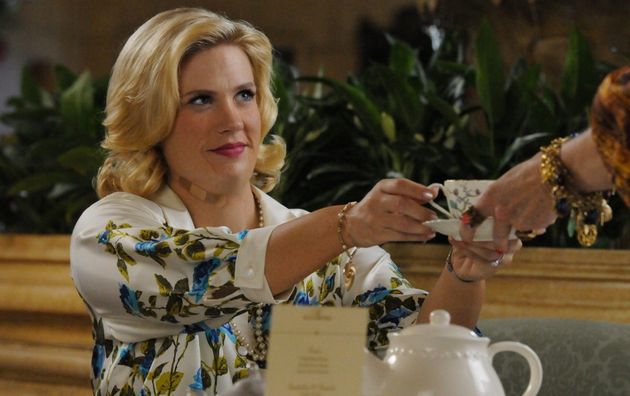 As well as being a disturbing plot twist that saw Betty Draper gain weight – and, even worse, dye her hair brown – because she’s unhappy with her marriage, it’s worth noting this fat suit came about to hide January Jones’ own pregnancy. Rather than tactfully hide the bump behind boxes and tables as seen in Parks and Rec, Mad Men gave Jones a fat suit, neck and face prosthetic and a body double for one naked back shot. While this gets a ten out of ten for effort, the bloated neck of Betty Draper looked, most of the time, more like she was wearing a child’s swimming arm band around her throat than an actual fat person. Overall, a 5/10 for offensive plot move and shite aesthetic.

Trying to make Peggy’s pregnancy seem possibly like she was just fat too, the extra padding put on Elizabeth Moss in series one of Mad Men was a lot more subtle than the one four seasons later on Betty Draper. As this fat suit wasn’t technically about weight gain, it’s surprising that it looked better than most on this list. It gets a solid 8/10 with points knocked off for having two fat suits in seven seasons just to give the Mad Men makeup department something different to try out. 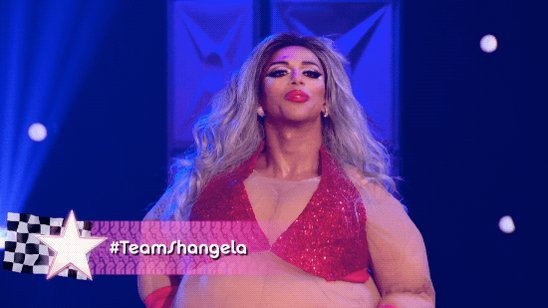 The point of Shangela’s fat suit in her All Stars 3 performance wasn’t realism, but there was no other point either. As plus size drag queen Vicky Vox pointed out in a (since deleted) tweet, the wearing of the costume, the positive reaction from the judging panel and the lip sync win was another instance of “fat shaming being celebrated.” Using fatness as a joke – especially with a fat suit – reeks of the Norbit and Big Momma’s House kind of comedy that is lazy, dated and a horrible gimmick that equates fatness with a punchline. For falling back on a toxic trope, Shangela earns a 2/10.

Hairspray is, undoubtedly, one of the best fat positive films ever. What could easily be a cheap joke for Travolta in his Edna Turnblad role was instead a true tribute to the original movie and Divine’s performance – Travolta’s Turnblad is a triumph. She looks gorgeous, has a killer makeover sequence and the fat suit never looks that unrealistic. The camp factor of having the Grease leading man play a plus size mam in this movie makes it a 10/10 fat suit moment. That said, my mam is still fuming that I compared “Welcome to the 60’s” to the both of us entering an Evans.

An underrated fat suit because, until recently, I just thought Matthew Lewis was a chunky chap during filming. There have been debates for years about Rowling using fatness as a negative descriptor for most of her lazy, unlikable characters, but Longbottom’s charm as a character comes from being a softer kind of lad. For not overdoing it and not making it a plot point, the Longbottom fat suit gets a 10/10.

Fat Bastard, ‘Austin Powers: The Spy Who Shagged Me’

Mike Myers in ‘Austin Powers: The Spy Who Shagged Me’

You knew it was coming. The Fat Bastard suit is legendary at this point and Mike Myers deserves his dues in also playing multiple characters in a film but not doing it shittily. Keeping my deep respect for Shrek, Dr Evil and The Cat in the Hat in check, it should probably be said that Fat Bastard is the grossest depiction of fat as lazy gluttony. With a lot of early-00s film cashing in on controversial humour that isn’t really allowed anymore, Fat Bastard is a great example of how politically incorrect the 00s were.

As for the fat suit itself, I’ve got to give Fat Bastard props for being hairy, having titties and looking more realistic than just a massive belly, massive neck and no fat anywhere else. For this reason, Fat Bastard claws back a couple of points in the rating system and earns a 3/10.

It’s yet to be seen if Borat 2 will use the fatness of his new characters as a running gag or a one off joke, but either way it is worth questioning: why include it at all? Fat people should never be the punchline and if we can expect Anne Hathaway to make herself unhealthily thin for a role, why aren’t more actors double teaming KFC double downs when they want to dress up as fat people?