Alan Pless maps out his version of a well-balanced life

We’re all more focused on avoiding disease in the midst of this year’s pandemic, but Grand Islander Alan Pless has been on a similar mission of promoting health for decades.

The retired operating engineer and follower of Tibetan Buddhism has made a lifelong study of healthy eating habits. He believes that fresh, raw food can provide the enzymes that promote and maintain health. He’s a vegan who wants to stick close to what Mother Nature provides as an important component of his map toward well-being.

Along with the swiss chard, kale and squash planted in his raised garden box, Pless has a special indoor garden where he grows wheatgrass year-round for the natural healing properties it provides for his well-being and that of those around him.

“For me, I like to keep a steady flow of green vegetables in my diet,” he explains. He does juices because he says that takes the strain off his digestive tract but still packs in the nutrients in a form that is easily absorbed. Pless also makes smoothies, a process that breaks down the cell structure of the plant. “You can absorb an awful lot of power and nutrition out of them quickly and without so much effort,” he said. He also incorporates a certain amount of fermented foods into the mix. “They seem to be naturally part of us,” he said, and they help our immune system.

“I don’t think it’s that important that we keep the level of protein I see as popular. A mother’s milk is only going around 4% protein. When we go for the high meat- or the high-protein diets, it might be good for muscle-building at a particular time in life … say late teenager. For most of life, you don’t really need that terribly much.” Without it, he says, there’s much less strain on your digestive tract.

“When we cook our food, we kill off pretty much all the enzymes. Enzymes are kind of like the little workers in the body,” he said. They repair what ails us, he explained. “If we eat live food more, at least blend them into the diet, then we tend to get those enzymes right from our food.” 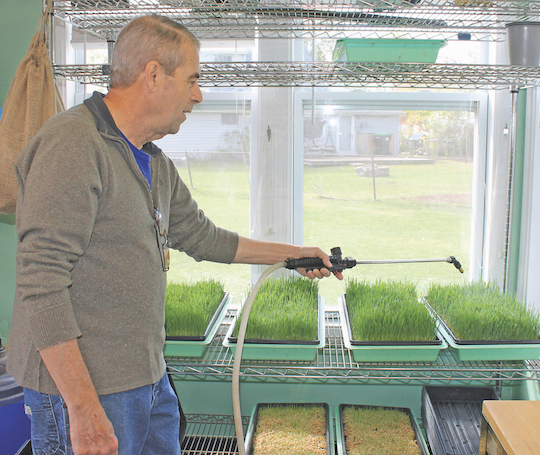 Alan Pless waters the wheatgrass he grows, juices and drinks as his go-to beverage for its health benefits.

Wheatgrass for What Ails You

Pless swears by the wheatgrass he grows as a healthful component of his diet, rich in chlorophyll that promotes higher oxygen levels in the body. He has studied the writings of the late nutritionist Ann Wigmore, one of the first proponents of the healing power of grasses. Pless drinks wheatgrass without blinking. His wife, Cheryl, has a slightly different take on the taste, but agrees that its benefits make it all worthwhile.

“I do not like the taste of wheatgrass, but it does help me tremendously. It tastes terrible,” she said. “It gives you energy. It helps your blood. It just helps you all around. I love it. I drank it for 10 years now. Add an apple to it – that helps a little bit. As you can see, Alan has a lot of energy off it. That’s why I love it,” she said. Pless grows it, juices it under high pressure and drinks it within 15 minutes of making it, as his go-to beverage. He said you can freeze-dry it to reconstitute it later. He shares a lot of what he grows with friends who need a health boost, including an older woman suffering from cancer and a young man who sustained an arm injury. He mixes fruit and vegetables – carrot celery and apple – into wheatgrass to make it more palatable for women, who he says are more taste-sensitive. For men, he quips that he tells them, “Just drink this. Hold your nose, pretend it’s whiskey and don’t whine to me”

The Pless family of four grown children and seven grandchildren reaps the benefit of his years of research. He has read many books on a healthful diet. One favorite is “Raw Family Signature Dishes; A Step-by-Step Guide to Essential Live-Food Recipes,” by Victoria Boutenko.

A natural source of vitamins

Pless mixed up a batch and got a dark green, thick juice made from the young grass of the wheat plant. According to webmd.com, an online publisher of news and information about human health and well-being: “Wheatgrass juice may look like what you’d get if you put your lawn trimmings in a blender. But fans say it can strengthen the immune system, detoxify the body, and ward off disease.” The website also says. “Wheatgrass is a natural source of vitamins and minerals (a few of which are antioxidants), including: Vitamins A, E, C, K and B6; calcium, selenium, magnesium and iron.

“The leaves are tough to digest, so they’re usually crushed and squeezed to make juice. Wheatgrass leaves also can be dried and made into tablets or capsules. Some people mix wheatgrass with water and use it as an enema to cleanse the digestive system. Others eat raw wheatgrass because they believe that cooking foods destroys the natural enzymes that provide the real health kick,” WebMD says.

The website says that benefits from consuming wheatgrass include easing symptoms of ulcerative colitis and reducing side-effects of chemotherapy.

Other tips Pless cites for good health include avoiding that late-night snack. “Nowadays they say – I think it’s pretty wise – that towards the evening, you stop eating and leave at least 12 hours where your digestive tract won’t be working on anything very heavy at all, maybe just water and some light fluids.”

He describes a good meal to begin a day of eating healthy. “At this time in the fall, I start off with a little oatmeal [whole oats known as groats, soaked overnight in water] with fresh fruit or a little bit of dried fruit in it. A little bit of ground flax seed for the omegas – the fatty acids – and I like some amla in there.” Amla, known as the Indian gooseberry, is like kiwi. It is considered a great source of vitamin C and is known as a powerful antioxidant. Pless buys the dried fruit online from mountainroseherbs.com.

He said it has helped people he knows to ease symptoms of arthritis, especially when they cut out their consumption of dairy products.

Advice for vegans and meat-eaters

The rest of the day’s food can vary, according to how he feels or what season it is. But it’s usually just one meal, with small, cooked additives throughout the day. As a vegan, he said his additives can range from a baked sweet potato to mushrooms and onions. He’s also a fan of the fully-sprouted wheat bread called Ezekiel bread. “I’m a very plain eater,” he said. He has advice for both vegans and meat-eaters. “Go for stuff that’s not too processed.” And when it comes to animals, he said they should be raised in a caring way, “and then you’re going to have a healthier animal, which is going to produce a better food for you.”

Listen to your body

Pless takes a holistic approach to his diet. “There is no reason to separate the emotional and the physical and the material in the world,” he said. “Those things together will help produce better food for you.”

An easy way he decides what to eat in a day is just what food looks tempting to him. “If you need something nutritionally, your body will help you marvel over it when you see it,” he said. “That can be your body actually asking for these nutrients.”

Pless said you eventually ride a wave of health from the cumulative effects of good food choices. He has shopped at the Lexington Cooperative Market in Buffalo since the 1970s for their health food. The co-op now has stores at 807 Elmwood Ave. and 1678 Hertel Ave., both in Buffalo. “Every town I ever worked in had a co-op that was left over from the 1960s or ’70s … they will never go away,” he said. But Pless said you also can find health food in most grocery stores now, in their organic foods section.

Starting in his teens, Pless’ approach to health has been centered on diet, exercise, meditation and positive energy. “I started reading a yoga book from a fellow that got educated in London, who was from India, and he spoke about how to live a lot healthier from a combination of exercise and diet.”

“That got me introduced to the concept of your mind and your outlook being very important to your general happiness. And your balance was sort of kept by the old methods that were always taught in most all the world’s great religions – of being healthy, being positive, being kind to others – taking a path that generates a lot of what we’d call positive karma,” he said.

“Generate that positive feeling and energy around yourself and your family and friends and neighbors as much as possible, and that will help guide you, also. When that falls apart or you when you become kind of selfish and you’re doing things just to make money, you’ll find that your health will suffer from too much of that, also, and your stress levels will go up.”

Pless, a Grand Island High School graduate, said that during his long career as an operating engineer, first with his dad’s company and eventually with Sevenson Environmental Services, he gained a reputation as a calm person on a job that had its share of stress. He tries to focus on not striving to acquire things. “I don’t think material success is the big answer; it’s part of the solution to trouble, he said. “When we make it our god, it becomes overwhelming and takes away our health and our happiness.”

Pless is a proponent of moderation and balance: Not the mansion, but a comfortable house; not a fancy car, but functional, he said. “Like a good horse was!” back in the day. “And maintain that ever-important sense of humor.”

Although he follows the tenets of Buddhism, he believes all religions have fundamental characteristics in common. “Kindness could probably be the world’s religion,” he said. “In farming, and raising and delivering food to people, we should always take into account the fact that we want the food to serve the people well. So we can mostly do that by working with nature, all the time, in the production of it.” 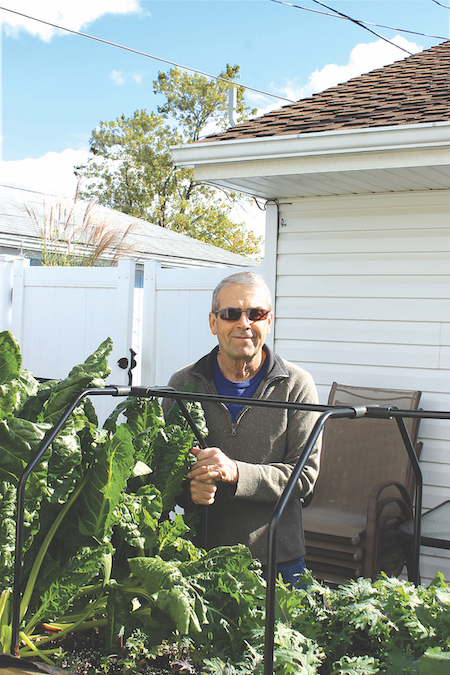 Alan Pless tends to a garden of kale and Swiss chard in the backyard of his Grand Island home.

A professor explores the challenges of being pregnant in academe (opinion)

Inside the Sirtfood Celebrity Diet Trend

Inside the Sirtfood Celebrity Diet Trend