The wool trade: a long-time hostage to intransigence 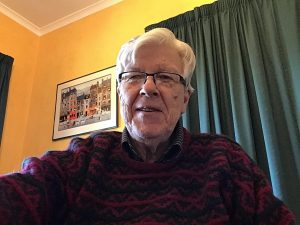 In this article, Mr Farran shares his views on mulesing, pain relief and breeding for plain-bodied sheep, but highlights the reluctance of stud masters and clients to change blood lines has kept mulesing in “the realm of accepted practice.” He also addresses what he feels has been AWI’s lacklustre performance on the issue.

The wool trade. A long-time hostage to intransigence

For some decades now the wool industry, at home and abroad, has been imperilled by a hostile animal welfare campaign that has effectively penetrated the retail end of the apparel market.

This has also adversely affected the earlier stages of processing and manufacture, with potentially devastating consequences for the financial viability of wool growers and the industry overall.

The objection is to mulesing, a process whereby loose folds of skin or wrinkles in the breech of sheep — lambs at the time — are removed surgically, usually with some form of pain killer being applied. The purpose of the procedure is to protect the sheep from fly strike, particularly in hot grazing regions and in humid weather where skin folds or wrinkles in the breech may become sweaty and odorous. This condition attracts swarms of blowflies which turn into maggots which in turn eat away under the sheep’s skin, causing much pain and distress, and unless chemically treated, early death.

In response to these campaigns, the wool industry has undertaken various marketing and promotional strategies to meet or counter the resulting consumer resistance to wool products produced from mulesed sheep and to alter public perception in that regard.

Given that most fine wool Merinos carry these breech folds or wrinkles from birth, without treatment they would be vulnerable to flystrike. For ages, growers have preferred to mules rather than keeping track of their flocks over millions of hectares to catch and treat when fly strike appears. Hardly a practical approach anyway.

Efforts to overcome the problem have involved breeding programs to tighten the skin around the breech so that a festering condition is prevented. As such, these breeding processes require several generations to effect significant change, so time is a problem. But success can be achieved, as seen in the plainer bodies of the sheep on display at today’s sheep shows. Consistency in the breed thereafter is an additional challenge.

Speed-breeding can have unintended consequences

Such speed breeding programs may have unintended consequences such as loss of fineness in the fleece or loss of strength in the staple. Genetic complications can also compromise the breed’s general resilience. As for the fineness issue this can be offset commercially thanks to technology that now permits a ‘fine wool’ garment to be manufactured from coarser wools.

Given that many stud masters and their clients wish to maintain their blood lines evolved over many years, even centuries, they still insist, for this and other traditional reasons, on continuing with mulesing and to keep it in the realm of accepted practice. These producers believe the market does not understand the necessity for mulesing, even generally, because they are utilising it with a certified pain killer (spray) which should, they say, alleviate concerns about the procedure. But that message is not going over too well and the pressure to desist from the practice is increasing. Meanwhile, lurid photographs exhibited by the animal welfare groups tell another story.

Some Merinos, a minority, do not necessitate the procedure as they possess loose, not tight, skin formations which grow longer, finer staples. Attempts at replicating that formation on a wide scale through breeding have been equivocal to date.

Mulesing should be ‘front and centre’ for AWI

The mulesing issue, one way or another, should be front and centre with the grower/government-funded organisation that exists to protect and promote the industry, namely Australian Wool Innovation (AWI). But its commitment to a solution or better still an alternative to mulesing has been lacklustre at best. Why might this be so?

The core politics of AWI, since it succeeded a series of failed wool grower bodies a decade ago, has centred around the mulesing issue. In short, to suppress it as an issue. Successive AWI board elections have reflected at their heart a determination to maintain acceptance of mulesing in the face of pressure to do otherwise and to handle it so that it would fade away as an issue and divert attention elsewhere. Behind this has been a close collaboration between stud masters of a certain vintage and the promoters of a patented spray-on pain relief product that has been the key to attempts to make mulesing acceptable or appear to be acceptable to markets and the public.

AWI features the fact that 86 percent of growers who mules use analgesics or anaesthetics. However, this carries little weight with consumers or customers more widely. Also the reported data indicates that only 40pc of the wool offered at auctions is declared as such.

To illustrate the current position. In its most recent annual report, AWI outlines the work it is undertaking in the area including research on various non-invasive management tools to reduce the risk of flystrike. These include a would-be (could be) vaccine to inoculate sheep against fly strike; breaking the blow-fly breeding cycle; and without any specificity developing breech modification procedures.

No ‘blood-letting’ with freeze branding

Yet if there were already an acceptable alternative to mulesing that ticks the boxes, the industry might be hearing about it, with applause. But not from AWI.

The treatment concerned is known as Freeze branding and uses liquid nitrogen. It is a technique similar to that used by family GPs to remove skin growths such as warts and keratosis from human skin. I believe there is no perceptible pain, which is similar to the sensation when cold steel is pressed on skin. Certainly no trauma.

When applied around the breech and tail area the exposed ‘freeze-branded’ skin will drop off and leave a bare area of stretched scar tissue similar to the effect of mulesing. No exposed skin, no cutting of flesh or blood-letting is involved. The area is thereafter protected against fly-strike. Growers have reported that there is no setback in condition and the lambs continue to gain weight as would be normal.

The body responsible for wool selling and quality control at national auctions is the Australian Wool Exchange (AWEX).

It requires that woolgrowers complete a National Wool Declaration (NWD) at the time of shearing, duly certified, to provide product transparency in world markets. Wool can be declared as Non-Mulesed, Ceased Mulesing, or Mulesed with Pain Relief (AA).

Back in 2004, the industry collectively committed to phasing out mulesing by the end of 2010, but that deadline has long since passed. Currently only 10.8pc of Merino wool growers have declared they have ceased mulesing while a further 3.6pc have undertaken to do so. A pitiful outcome.

The contested question is whether the freeze branding process qualifies, for the purposes of the NWD, as Not Mulesed or Ceased Mulesed. It should be a no-brainer. Mulesing involves, as defined, a surgical (cutting) procedure resulting in pain and the shedding of blood, with or without pain relief. Freeze branding is none of that. AWEX is coming to the view that freeze branding is not mulesing and the declaration can so state that when it is the case.

Why has freeze branding not been adopted?

When the industry has at hand a painless, bloodless technique that is easier to administer and would solve its problem with the market, why would it not adopt such an option with both hands?

You guessed it. Vested interests in AWI and associated grower bodies who resist change in spite of mulesing being a strong negative in the market and an ongoing threat to the viability, even survival, of the industry. Logic doesn’t seem to come into it. Nor rationality.

It is argued that the pain aspect of freeze branding has not been scientifically proven. This is currently being laboratory tested, though an inordinate amount of time is being spent awaiting a definitive result. Meanwhile, a significant number of growers have adopted the treatment for their sheep and are well satisfied with it on the pain issue, and as to subsequent condition and weight gain.

It is somewhat ironical and devious, that when opponents to freeze branding raise the pain issue they conveniently overlook the pain involved in tail docking and the castrating of male lambs, both integral aspects of lamb marking.

The situation is very serious if an acceptable alternative to mulesing is available and is not supported by the very body that exists for this and related purposes.

A Commonwealth Senate Estimates Committee has examined AWI and its directors on several occasions, mainly to address shortcomings over governance. If the committee doesn’t do anything else from now, it, together with other interested bodies, should urgently probe the mulesing issue with AWI in the interests of the entire wool trade – wool growers, brokers, processors, manufacturers, and retailers at large — including associated fashion houses — and their customers. AWI would not need this prompting if it were doing its job at this critical time.

Wool growers might expect the Federal Government to be pushing on this given its part-funding of AWI. The relationship of the grower community with the government might be described as sweet and sour. The previous minister, Senator Bridget McKenzie, was very direct when cross-examining AWI directors at Senate hearings as a backbencher but on becoming minister was not so forthcoming.

During Wool Week in August last year, with woolgrowers primed with questions, she pulled out from speaking at the official lunch at short notice and sent along the then very new Nationals member for Mallee, Anne Webster, who kept to script.

Similarly, as a backbencher, David Littleproud was well aware of AWI’s shortcomings but has not shown the same concerns since his elevation to Agriculture Minister.

The government should be following up this unfinished business with AWI.

Intermittent Fasting Is Too Good to be True, Says New Study