CDC’s disease mimes catch on in US over 9GAG app


A series of illustrations commissioned by the Centers for Disease Control (CDC) showing various diseases as anime characters has caught on in the US after being uploaded on the meme sharing app 9GAG.

The series, launched in 2018 to build public health awareness among those aged 35 or younger, has so far introduced illustrations for 26 diseases, including COVID-19, which was part of last week’s issue.

Each reimagined illness appears on the cover of the magazine Disease, with their appearance, outfit, accessories and even the background art representing aspects of the disease, while the cover blurbs offer tips on how to stay healthy. 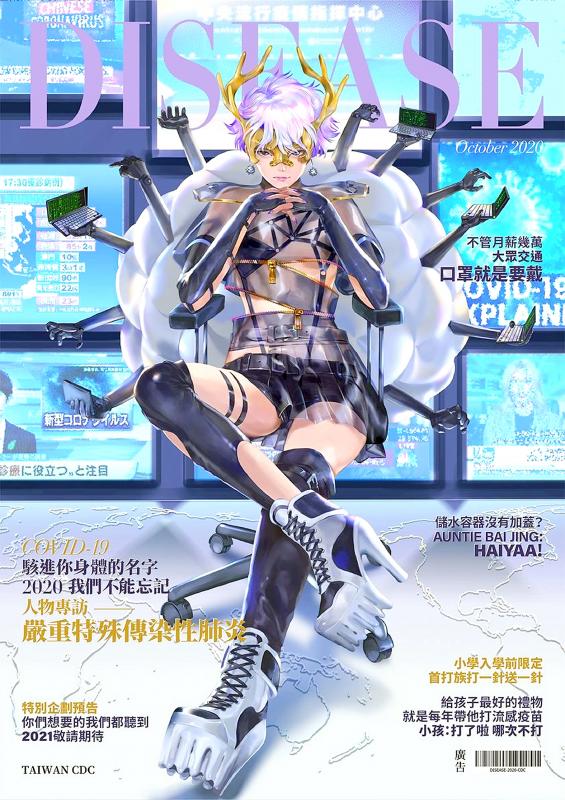 Photo provided by the Centers for Disease Control

After capturing the interest of Internet users in Japan last year, the illustrations caught on in the US this week after a user uploaded them to 9GAG, which shared them on its Facebook page under a caption that read: “Why are they so attractive?”

In response, Chiyou (蚩尤), the artist behind illustrations for COVID-19, Ebola and the plague, said that taking diseases out of a textbook and giving them a human form makes them more approachable and easier to understand.

For the COVID-19 illustration — which was the “most difficult to create” — Chiyou thought of the “mysterious and unpredictable” disease as a computer hacker, which he described as “always changing, possessing many faces and able to spread from country to country the moment people let their guard down.”

The structure of the virus also informed the illustration, he said, adding that its spherical shape is represented in the model’s chair, while the spike proteins on the virus’ surface appear as outward-reaching metal arms.

Say HANa (林花), who spent a month creating the illustrations for syphilis and rubella, said that her greatest challenge was reconciling the diseases’ sometimes gruesome symptoms with their “cute” personifications.

She said that the origin story of syphilis — a sexually transmitted disease that takes its name from a mythical shepherd — was her inspiration for representing the disease as a shepherdess, with a veiled image of a sexual organ stitched on her corset and the disease’s characteristic rash represented as red ornaments on her clothing.

On Friday night, the CDC reacted to its sudden popularity by thanking people in a Facebook post and announcing that it plans to feature the illustrations in a desk calendar for next year.

Despite criticism that the pictures make light of deadly diseases, the center said that people are enjoying the campaign, and even learning something from them.

Comments will be moderated. Keep comments relevant to the article. Remarks containing abusive and obscene language, personal attacks of any kind or promotion will be removed and the user banned. Final decision will be at the discretion of the Taipei Times.

The latest health events in the Bloomington-Normal area | Health

The latest health events in the Bloomington-Normal area | Health