We sometimes forget that reducing cholesterol isn’t an end unto itself. The goal of lowering levels of serum cholesterol is to reduce heart disease, and hopefully reduce mortality. But, to reach this goal, you have to start somewhere. And that somewhere is usually diet. 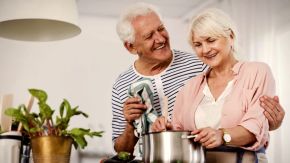 Speaking of which, a new study reported that more than two-thirds of deaths from heart disease worldwide could be prevented by eating a healthier diet.

To that end, here are 10 healthy foods that people should eat more of to help lower their cholesterol and, hopefully, improve and extend their time here on Earth.

Almonds and other nuts

Avocados are high in monounsaturated fat, soluble and insoluble fiber, and other nutrients. Soluble fiber lowers cholesterol. In a study published in the Journal of the American Heart Association, researchers demonstrated that overweight and obese individuals who ate one avocado a day as part of a moderate-fat diet had a greater reduction in LDL cholesterol, total cholesterol, and triglycerides than those who were on either a low-fat diet or a moderate-fat diet without avocado.

Research has shown that cruciferous vegetables, like broccoli, can lower plasma lipid and cholesterol levels. In one study that included two randomized dietary intervention trials, people who ate 400 g of broccoli per week for 12 weeks lowered their LDL cholesterol by 1.8% in the first trial and 2.5% in the second. “At a population level, a 1% reduction in LDL‐cholesterol (LDL‐C) has been associated with a 1–2% reduction in risk of coronary artery disease,” wrote the authors of the study. “Thus, a reduction in LDL‐C by cruciferous vegetables may contribute to the putative health promoting properties of these vegetables.”

Carrots are synonymous with carotenoids—particularly beta-carotene, a powerful antioxidant. Carrots are also a good source of fiber and other nutrients, and they make a handy snack. Researchers showed in an animal model that adding a daily dose of carrots significantly decreased cholesterol and triglyceride levels, and raised antioxidant levels.

Navy beans, also called white beans, have the highest fiber content of any bean. Although beans often get a bad rap, they’re a nearly perfect food. Beans—which are part of the family of legumes that include chickpeas, lentils, and peas—are packed with protein, fiber, and many nutrients and minerals. Eating a diet rich in beans and other legumes decreases total and LDL cholesterol, according to a meta-analysis of 10 randomized clinical trials. Specifically, participants who ate legumes for at least 3 weeks reduced their total cholesterol by an average 11.8 mg/dL and their LDL cholesterol by 8.0 mg/dL.

Oats are a great source of soluble fiber. The main soluble fiber found in oats is oat β-glucan, which is believed to be mainly responsible for oats’ ability to lower cholesterol. In one randomized controlled trial, published in the Journal of the Medical Association of Thailand, adults with high cholesterol who ate 70 g of oatmeal a day for four weeks lowered their total cholesterol by 5% and their LDL cholesterol by 10%. So, start your day with a bowl of oatmeal, and top it with berries for extra fiber.

Olive oil is a staple of the Mediterranean diet, which is linked with increased longevity and reduced risk of chronic disease. A recent meta-analysis revealed that olive oil, as part of a Mediterranean diet in which it replaced other oils and fats, significantly decreased total cholesterol, LDL cholesterol, and oxidized LDL levels when compared with a Westernized diet. In addition, specialty olive oil with a high polyphenol content increased HDL cholesterol concentration by almost 50%.

You can lower LDL cholesterol by substituting cold-water fish, such as salmon, for meat twice a week. Salmon and other fatty, oily fish—like mackerel, herring, sardines, tuna, and more—are high in healthy polyunsaturated fats and omega-3 fatty acid, which reduce triglycerides and raise HDL cholesterol. These fish are also low in saturated fat and high in protein.

Eating soybeans and soy-based foods, such as soy milk, tofu, and tempeh, can be a healthier way to get protein than eating meat or animal products. Plus, eating soy protein reduces LDL cholesterol by 3% to 4%, according to a recent meta-analysis published in The Journal of Nutrition.

“When one adds the displacement of high saturated fat and cholesterol-rich meats to a diet that includes soy, the reduction of cholesterol could be [even] greater,” said lead author of the study David Jenkins, MD, PhD, DSc, director of the Clinical Nutrition and Risk Factor Modification Centre at St. Michael’s Hospital, in Toronto, Canada. “The existing data and our analysis of it suggest soy protein contributes to heart health.”