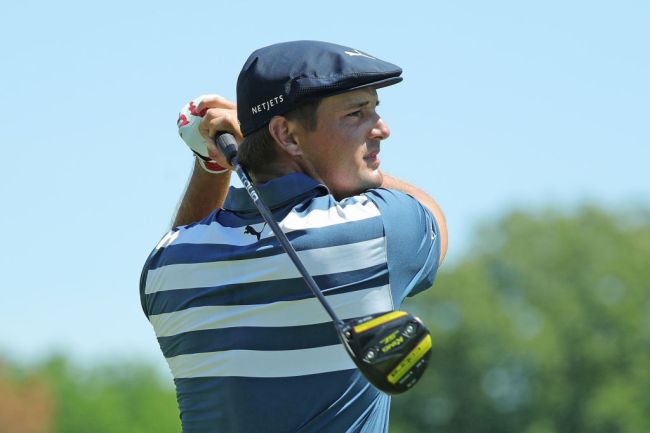 Bryson DeChambeau may be the longest hitter on the PGA Tour, he may have already put on serious muscle and mass to pick up swing speed, he may have just overpowered Winged Foot to win the U.S. Open in unprecedented fashion, but he’s not anywhere close to slowing down when it comes to pushing the limits with his game and body.

DeChambeau finished T-8 at the Shriners Hospitals for Children Open this past weekend, which will be his lone start before the Masters scheduled for November 12-15. While taking a month off from competition may seem like a questionable move, DeChambeau is going to be getting back into the lab and the gym in an attempt to pick up even more distance.

While he’s currently listed at 235 pounds, DeChambeau is going to try and put on 10 more pounds ahead of the Masters.

“I’m not really going to touch a club too much,” he told reporters at the Shriners, according to Golf Digest. “Going to be training pretty hard and getting myself up to hopefully around 245, something like that, in weight, be the first time I’ve ever done that. So I’m going to be consuming a lot and see and working out a lot and see what can go from there.”

So, Big Boy Bryson is going to be arriving at Augusta National as Bigger Boy Bryson.

Working out nonstop and essentially eating everything in sight is one thing, but DeChambeau has another experiment underway as well. Last week he hinted that he’s been messing around with a 48-inch driver to pick up more distance off the tee and he hopes to put it in play at the Masters.

DeChambeau didn’t reveal how much further he’s hitting the longer driver, but he’s going to try to get it tuned in ahead of his quest for a green jacket. In order to do so, he says he’s going to hit upwards to 2,000 drives leading into the event. We’re 31 days out from the Masters, which means DeChambeau will need to hit 65 drives per day to reach that 2,000 mark.

“I don’t know how many drivers I’ll hit, but I’ll hit as many as I need to,” DeChambeau said. “And from a speed-training perspective I could probably go upwards of over 1,00 to probably 2,000, around 2,000 drives the next four weeks trying to get my speed up.”

Augusta National should be worried about what DeChambeau may do to it next month. Jordan Spieth made the not so crazy comment recently stating that DeChambeau will “have to lose the Masters to not win the Masters.”