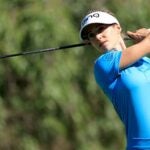 Beatriz Recari tees off at the 2020 LPGA Marathon Classic.

Beatriz Recari has been traversing the globe as an LPGA Tour pro for over a decade. But last June, the 33-year-old Spaniard noticed that years of competition and travel were beginning to take a serious toll on her body.

“Every year, I got sick around April, May, as soon as we started with the heavy competition of many tournaments in a row,” Recari said in a recent phone interview. “I would struggle so much at times. There was one time that I had to withdraw from the Pro-Am and pay the fine so I could get up on Thursday. I was that tired. I would wake up unable to get out of bed. Even though I never looked out of shape, inside, I was not fit by any means.”

After working with a nutritionist failed to garner the results Recari was after, the three-time LPGA Tour winner decided it was time to take her health into her own hands. She did her own research online, and started by eliminating dairy and white carbs, like bread, rice and even wheat products.

Though Recari says she quickly felt better, she ended up modifying her diet to include “clean carbs” only for breakfast, like overnight oats with chia or flax seeds. Her meals include a protein and vegetables, and she snacks on things like walnuts and almonds.

“I never felt like an athlete,” Recari said. “I felt so heavy and slow. I don’t care how I looked. Inside, I didn’t feel like an athlete. So I wanted to do things that made me feel more light, more athletic, more responsive, more reactive.”

Recari then incorporated a more cardio-centric exercise regimen into her routine, and incredibly, she shed 20 lbs. from her already slim frame in only two months. The addition of boxing to her gym routine further hastened her physical transformation.

“I don’t believe in just working out and then eating like crap,” Recari said. “Because when I eat like crap, I feel like crap. Of course, it helps to work out. You’re going to feel better. But that was definitely the biggest factor in this whole change.”

For Recari, the changes to her diet were never about losing weight. The the effect on her overall wellbeing has been the biggest boon.

“I don’t get as tired, first of all,” she said. “That’s for me the biggest change that I noticed, because I inevitably compare with the last few tournaments that I played last year. And then in terms of strength, I am stronger. I know that because I lift more. I feel better. I do more.

Nearly a year and a half in to her transformation, Recari is stronger and healthier than ever — an example to us all of the power of self-discipline. As a four-year member of Columbia’s inaugural class of female varsity golfers, Jessica can out-birdie everyone on the masthead. She can out-hustle them in the office, too, where she’s primarily responsible for producing both print and online features, and overseeing major special projects, such as GOLF’s inaugural Style Is­sue, which debuted in February 2018. Her origi­nal interview series, “A Round With,” debuted in November of 2015, and appeared in both in the magazine and in video form on GOLF.com.

Memories of a stillborn child