Rapid Weight Gain in an Excessively Sleepy Girl With Asthma


Editor’s Note:
The Case Challenge series includes difficult-to-diagnose conditions, some of which are not frequently encountered by most clinicians but are nonetheless important to accurately recognize. Test your diagnostic and treatment skills using the following patient scenario and corresponding questions. If you have a case that you would like to suggest for a future Case Challenge, please contact us .

A 5-year-old girl with a long-standing history of severe asthma and eczema presented to a pediatric pulmonary and sleep medicine clinic. Her asthma was stabilized with an inhaled corticosteroid (fluticasone, 88 µg, inhaled twice daily), albuterol sulfate (180 µg, inhaled as needed), and ipratropium bromide (34 µg, inhaled as needed). Her skin condition improved with a moderately aggressive regimen of hydrating bleach baths, moisturizing lotions, nonsedating antihistamines, and as-needed use of topical hydrocortisone or triamcinolone, pimecrolimus, and mupirocin.

Her asthma remained stable for a year but then progressed to the extent that the dosage of inhaled fluticasone was increased to 220 µg twice daily. Bronchoscopy revealed only mild bronchomalacia of the left mainstem bronchus (Figure 1), diffuse mild inflammation, and increased secretions. 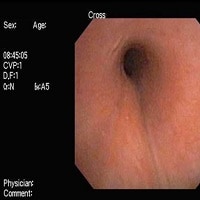 Montelukast (5 mg daily) and nasal fluticasone (50 µg) were added to her regimen. In addition, diphenhydramine (25 mg) was prescribed to be used as needed for excessive itchiness, eczema flares, and allergic asthma flares.

The patient remained well and was followed up in the clinic approximately every 3 months, owing to the complexity of her condition. After 6 months, significant weight gain and an increasing body mass index (BMI) were noted. She met with a dietitian, who recommended weight loss strategies. From the age of 7-8 years, the patient demonstrated a modest weight loss from the changes in her diet. However, symptoms of fatigue, excessive daytime sleepiness (EDS), and inattention in school developed over a 1- to 2-month period, and her weight started to increase rapidly despite the dietary intervention.

Her daytime sleepiness seemed to be progressive, and she would fall asleep suddenly even when she wanted to be awake. Concerned about the emerging symptoms of inattention, autistic features, fatigue, and sleepiness, the girl’s parents are seeking further medical advice.