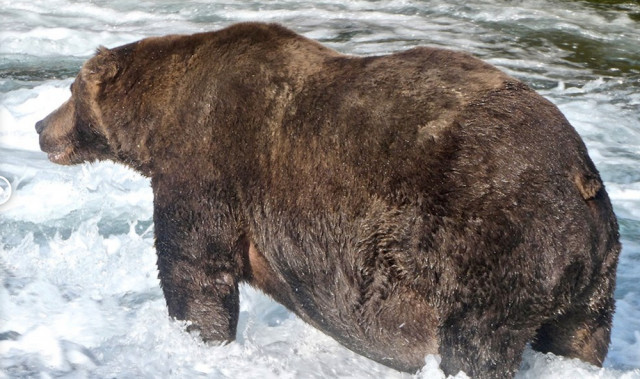 In case you missed it, there’s a new champion for Fat bear Week.

Each year, people vote online for the heftiest brown bear at the Katmai National Park and Preserve in southern Alaska, during the Fat Bear Week contest.

It’s not your average contest but it’s designed to showcase how much the bears need to eat to survive the winter.

It’s an online, Stanley Cup-like bracket that pits bears against each other for votes. The competition began back in 2014 as Fat Bear Tuesday. Since then it’s grown into a week-long event where people get to vote on the biggest brown bear.

The park is home to 2,200 brown bears who dine on sockeye salmon at the Brooks River as the try to put on weight for the winter.

The Katmai National Park and Preserve’s website features bios of the different competitors and more than 500,000 people cast their votes.

This year’s winner, bear 747, is described as, “a very large adult male with wide-set, peg-like ears and a blocky muzzle.”

According to the Anchorage Daily News, “while 747 has been runner-up in year’s past, he’s never ascended the throne. Some who work at the park say he may even be the largest bear they’ve ever witnessed.”

The bears will continue to eat for the next few weeks before entering hibernation where their metabolisms will slow and they will live off of the fat they have accumulated over the summer and fall.

All of the bears face a struggle to survive according to the Katmai National Park and Preserve website.

“Adult males need to grow large to dominate the best fishing spots and secure mating opportunities. Female bears need to gain weight for their own survival as well as to support the birth and growth of cubs.”

The votes are in! You’ve crowned the Earl of Avoirdupois, bear 747, the 2020 Fat Bear Week Champion. No longer the runner-up, 747 fulfills the fate of the fat and fabulous as he heads off to hibernation.#FatBearWeek pic.twitter.com/NpyguJiZb4