Remarkable pictures show how Alaskan bears get fat before hibernation


These amazing photographs show the incredible before and after weight gain of grizzlies in Alaska who can eat 100,000 calories a day to prepare for winter.

The North American heavyweights of the Katmai National Park and Preserve won’t survive if they are too slim for their long winter slumber.

During hibernation the large mammals can lose up to a third of their bodyweight, with lactating females losing even more.

In a vital six months before the harsh weather arrives the bears need to eat a year’s worth of food, putting on up to two pounds of flab a day.

And there’s no ‘fat-shaming’ a heavy bear in Katmai with authorities celebrating the biggest and therefore healthiest animals.

Tonight at 6pm Alaska time one brown bear will be crowed the winner of ‘Fat Bear Week’ with the public voting for their favorite.

Slidey shows bear 812 (left, in June, and right, in September). Eight-one-two has grizzled brown fun and crescent shaped ears. Behaviorally, 812 can be identified by his tendency to lick his lips frequently and use rocks as a platform to eat salmon. He will often extend a front leg forward when fishing on the lip of the falls

Slidey shows bear 480 (left June, right September). Bear 480 ‘Otis’ is a medium-large adult male with blond and brown fur in early summer. By autumn, his coat becomes grizzled and he sports a patch of lighter fur on his left shoulder

Bear 32 ‘Chunk’ (left June, right September) is a large adult male with narrowly-set eyes and a prominent brow ridge. Even at his leanest, Chunk carries substantial fat reserves, especially on his hind quarters. In early summer he tends to shed much of the fur around his shoulders and neck. This gives him a two-toned appearance and exposes numerous scars and wounds. By late summer, his newly grown fur is dark brown

Slidey shows bear 909 (June left, September right). Bear 909 is a young female with grizzled brown fur. 909 was first identified as an independent two-year-old bear in 2018. She’s tolerant and playful of other bears, and she shares many behaviors with her mother and former Fat Bear Week champion, 409 Beadnose

His or her food intake will see them take the trophy ahead of 11 other competitors.

Amber Kraft, interpretation and education program manager at Katmai, said a happy bear was a heavy bear for winter.

She said: ‘There is no ‘fat-shaming’ going on with these animals. Fat bears mean they are healthy bears and ready for the winter. During hibernation bears live off their accumulated fat.

‘Katmai’s brown bears are at their fattest in late summer and early fall after a summer spent trying to satisfy their profound hunger. 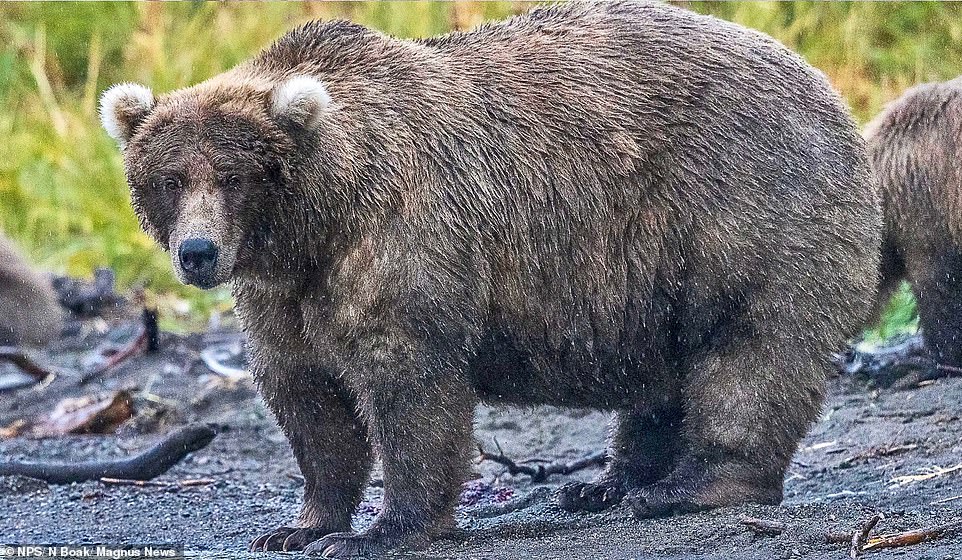 Bear 128 ‘Grazer’ is a large adult female (pictured in June, top and September, bottom) with blond fur, a long straight muzzle, and conspicuously large blond ears. During late summer and fall, her fur is grizzled brown and she is often one of the fattest bears to utilize Brooks River

‘Each bear faces its own challenges in order to gain the body mass necessary to survive. Adult males need to grow large to dominate the best fishing spots and secure mating opportunities.

‘Female bears need to gain weight for their own survival as well as to support the birth and growth of cubs.

‘Bear cubs experience the same hunger as older bears but also undergo tremendous growth spurts. Juvenile bears living on their own for the first time must navigate a gauntlet of hazards to establish a home range and find food without mother’s guidance.’

This year Amber said was a bumper time for one of the best weight gain foods for a hungry bear, salmon. 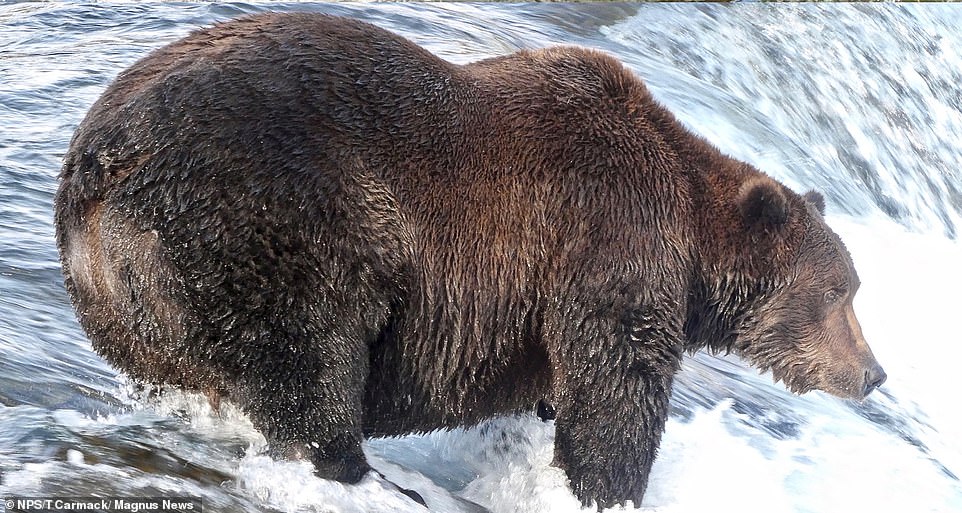 Bear 151 ‘Walker’ (pictured in June, top and September, bottom) is a large adult male. He has a skinny muzzle and widely spaced, upright ears. In early summer he has prominent dark eye-rings, and in late summer his fur is dark brown

She said: ‘This year’s sockeye salmon run in the Naknek arm [Lake] and the Brooks River were record-breaking.

‘The Naknek had four million salmon flow through it and Brooks River had 800,000 sockeye salmon.

‘The Brooks River has had very large and healthy sockeye runs for the past 4 years.

‘The silver salmon run, which begins later in the season was smaller than in recent years, but it is still trickling in and some bears are catching them at the falls.

‘Last year, however, we experienced a warmer than typical summer. This delayed the salmon as rivers and streams were too warm and salmon stayed in lakes and cooler water till much later in the season. 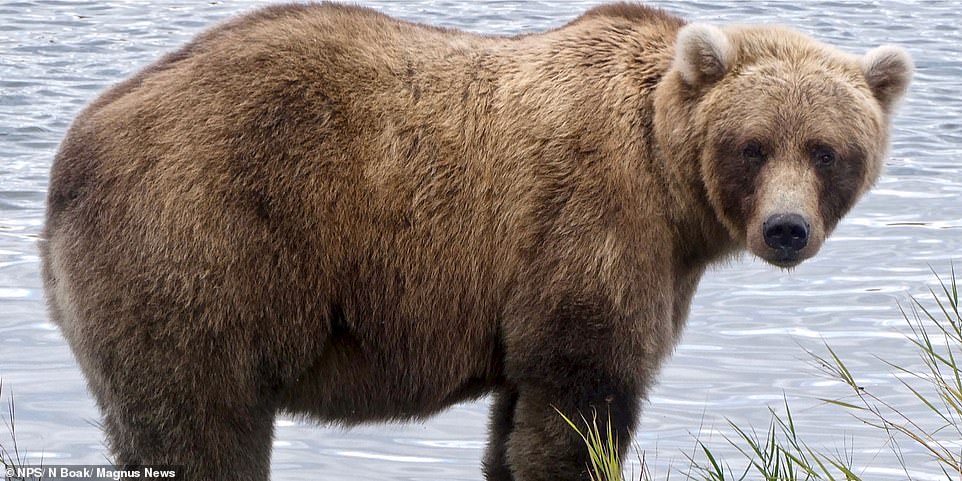 Seven-one-nine (top, in June and bottom, in September) is a young adult female with shaggy blond fur, a dark face, and tan-tipped claws. In the fall her coat becomes dark blond, but she retains light blond ears

‘If this warming trend continues, it could have an impact on the bears here at Katmai.’

Amber said the numbers involved to make a fat bear were far in excess of anything a human could compete with.

She said: ‘Some bears here in Katmai can eat more than 40 salmon in a day. 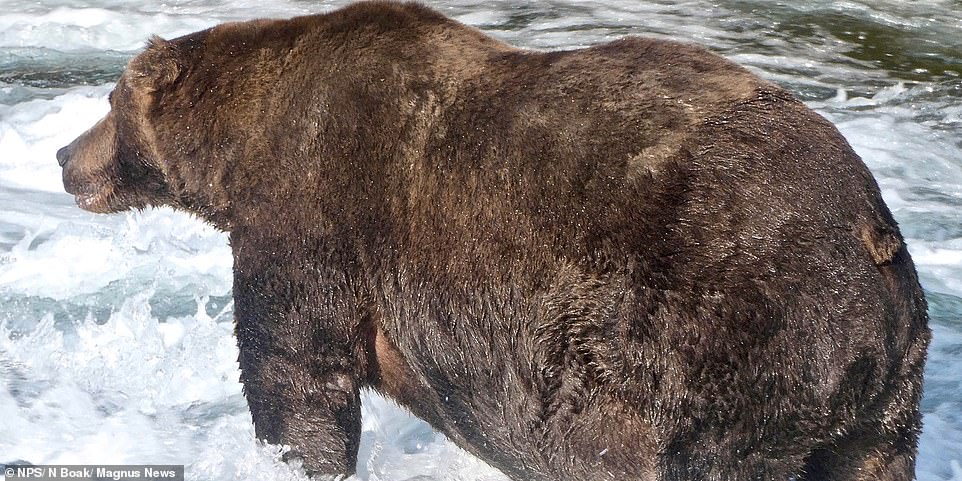 Seven-four-seven (top, in June and bottom, in September) is a very large adult male with wide-set, peg-like ears and a blocky muzzle. In early summer, his reddish-brown fur sheds in a patchy manner. Like many adult males, he often has scars and wounds on his face and neck. In late summer and fall, he is typically very fat with a low-hanging belly and uniformly dark brown fur

‘Excessive weight gain is key to a bear’s survival. Bears must eat an entire year’s worth of food in six months or less in order to survive winter hibernation and continued weight loss in the spring.

‘During hibernation, bears can lose 1/4 to 1/3 of their body weight. Lactating females can lose even more.

‘In contrast to the famine of winter and spring, Katmai’s brown bears rapidly regain weight in summer and fall. Incredibly, they can sometimes gain as much as one kilogram – over two pounds-of fat per day.’

Bear 435 ‘Holly’ (top, in June and bottom, in September) is a medium-large adult female with blond ears, blond fur, and pale, tan-colored claws. By early autumn, she is usually very fat with grizzled blond fur

Of course, it’s hard to get a bear to stand on the scales so Amber said weight gain estimates are made using known averages for the size of males and females.

She said: ‘From what we know about bears that are weighed we estimated the largest bear to be over 1400lbs. Sows are frequently 700lbs or more.

‘Katmai’s brown bears are some of the largest bears in the world. They can stand three to five feet at the shoulder and measure seven to 10 feet in length.

‘Most adult males typically weigh 600-900 pounds in mid-summer. By October and November, large adult males can weigh well over 1,000 pounds. Adult females average about 1/3 less in weight than adult males.

‘Fat Bear Tuesday was started by a ranger at Katmai. They created a bracket style competition between a selected group of the park’s very fat bears to engage the public in this phenomenon of brown bears in hyperphagia (hyper-eating) to prepare for winter, and it was huge a success.

‘This morphed into the current seven-day Fat Bear Week.

‘Today participants can watch the bears on a live video ‘bear cam’.

‘The bears with the most votes move up in the bracket. Participants support their favourite bears and there is general good will throughout the competition.

‘There are fans who can recite the history of the competition just as there are sports fans who can chronicle championships regardless of where their teams finish.’

We have had teachers tell us they are using it with students in their classrooms, folks filling out brackets for friendly competition in their offices and work places, as well as bars and folks missing sports playing along for the thrill of what will happen next.

‘We hope that people come away from the week with an understanding and appreciation for the importance of wild places like Katmai National Park and Preserve and work to preserve and save these resources.

‘Fat bears exemplify the richness of Katmai National Park and Bristol Bay, Alaska, a wild region that is home to more brown bears than people and the largest, healthiest runs of sockeye salmon left on the planet.’

How to lose weight and keep it off