The Uneven Decline of Health Services Across States During Lockdown


The national lockdown in April-May 2020 had devastating effects on people’s employment and earnings. About half of urban workers, for instance, did not earn any income during that period according to a recent survey by the Centre for Economic Performance at the London School of Economics. For good measure, many public services were also reduced or discontinued. This includes routine health services.

There is no strong reason to prefer one of the two resilience indicators. If health services improve continuously over time without major seasonal effects, the first indicator would be more informative. If there are pronounced seasonal effects, the second may be better. Since the picture is much the same for both resilience indicators, we focus mainly on the first (April-May 2020 compared with January-February 2020) from now.

Focusing on the first column to start with, the top five states in terms of health-services resilience include three states that are known to have relatively good social services in general and health services in particular: Kerala, Tamil Nadu and Himachal Pradesh. Some readers may be surprised to find Odisha among the top five, but this is consistent with earlier evidence of sustained efforts to improve health and nutrition services there in recent years. Telangana is the topper, based on this summary indicator.

At the bottom of the scale, we find three states that are notorious for dismal public services: Bihar, Jharkhand and Uttar Pradesh. In these states, health services are not only poor at all times, they have also collapsed more during the lockdown. The average decline was more than 50% in each case, and as large as 70% in Uttar Pradesh. In April-May, outpatient attendance was just 37% of pre-lockdown levels in Jharkhand, 24% in Bihar and 17% in Uttar Pradesh (see Appendix). Where are poor people supposed to go when public health care centres are as good as shut for weeks on end?

This sharp contrast between the usual “leaders and laggards” of social policy highlights the fact that the decline of health services during the national lockdown was largely avoidable. The better-organised states, with a stronger commitment to welfare, managed to keep basic services going to a large extent. The sharp decline of health-services activity indicators at the national level is largely driven by comparatively irresponsible states where little effort was made to sustain basic health services through the crisis.

It is, of course, true that Bihar, Jharkhand and Uttar Pradesh are among India’s poorest states, making it more difficult for them to absorb a shock like the COVID-19 crisis. But that also applies to Odisha and Chhattisgarh, and yet these two states did not experience anything like the same collapse of health services during the lockdown. In fact, both states did quite well, as Table 2 shows. Chhattisgarh and Odisha do even better, relative to other states, when we compare the situation in April-May 2020 with April-May 2019 instead of January-February 2020 (Table 2, second column). With this changed baseline, the broad inter-state contrasts remain much the same. For instance, the top five and the bottom three states are the same as before, except that Chhattisgarh replaces Tamil Nadu among the top five.

The element of irresponsibility in the collapse that occurred in Bihar, Jharkhand and Uttar Pradesh is clear from the fate of maternity-related services. Generally, those were among the least-affected health services during the lockdown. Almost all states, for instance, maintained levels of ANC registration close to normal in April and May 2020 (see Appendix). In Bihar, Jharkhand and Uttar Pradesh, however, there was a large drop in ANC registration as well as in institutional deliveries. Pregnant women, it seems, do not count for much in this patriarchy-ridden region. 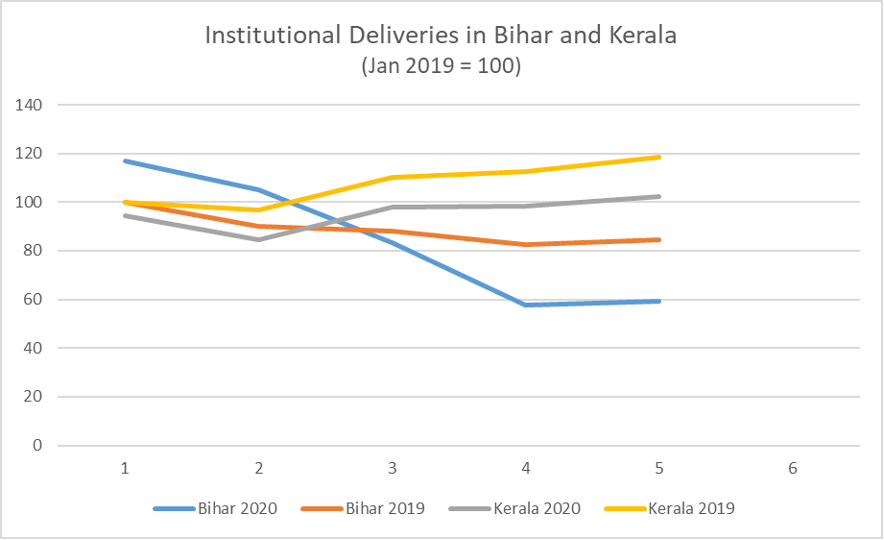 Hopefully, there was rapid recovery of routine health services soon after the lockdown in most states. HMIS data for recent months are yet to be placed in the public domain, so it is too early to tell. But even if the disruption was short-lived, it may translate into lasting damage for many people who needed urgent care at that time.

Jean Drèze is visiting professor at the Department of Economics, Ranchi University. Vipul Kumar Paikra is an independent researcher and is associated with the right to food campaign, Jharkhand.